The Summer Isn’t Over ‘Til…
VICTOR CALDERONE 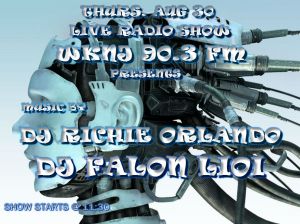 DJ Richie Orlando was born and raised in Brooklyn, N.Y. born into music – the son of a drummer.
His love for music started early, so the strong roots of drums ran through his blood…
his wide range of genres comes from the likes of rock, hip hop, r&b, freestyle,reggae, salsa, etc…
but when it came to dance and house music, this is where he found his calling…
since the ripe age of 5 Richie was an entertainer.
he played in all the school plays and talent shows every year.
loving to sing and dance he was home in front of the crowd,
and it followed him throughout life.,
from freestyle battles to battles in circles..
especially when he started going to clubs and dancing in big crowds.

He started going to clubs in the 90’s during the Limelight, Palladium days.
at such parties as NASA and the Roxy, soon moved to Tunnel, Exit,Carbon, Twilo, Vinyl just to name a few. He found a love for Raves in the mid and late 90’s. Again following the drums found himself at one of the longest running Monday night parties – Concrete Jungle along w/ DJ Odi this is what started the foundation of his style and craft – where he began to find his love for the music on a different level. Following his favorites such as, Victor Calderone, Danny Tenaglia, Boris, Jonathan Peters & Eric Morillo.

At 16 years old, he touched the tables for the first time. His best brought him over to a neighbor’s house where he learned how to scratch, mix hip hop and reggae. Soon to follow the art of blending came with freestyle. He picked it up quite fast and not to long after was faced with other issues in life and was forced to give up his new found hobby.

Years later in 2007, he decided to follow his heart and go with the path that he should’ve went down a long time ago. Once again picked up like he never left… Except this time it was Techno and House… or as he likes to call it, THE KRACK…
His love and passion for the music is the Energy you feel in the vibe he creates…
A real crowd mover.. His ability to take you on a musical journey w/ bass driven beats and suspenseful vocals…
Has touched the crowds of venues such as, Pacha, District 36, Webster hall, envy, Green House, Cosmoss, M2, HK, Glass, Eden, just to name a few. in NYC also Miami and California, at spots such as Vice, central, blue moon, Sky bar, Bacata, and the legendary Avalon.
and now on the road w/ productions. you can guarantee nothing short of FIRE on every track he works on…
Whether or not its hip-hop or dance… it’s almost a sure thing that it’s a BANGER!!!
So, look out for this rising star… Cause his passion and love for music will make him a future favorite

CURRENTLY:
DJ RICHIE ORLANDO IS IN THE STUDIO PRODUCING SOME NEW HOT TRACKS.

Dj Falon Lioi attributes her love for house music from a Crobar party that she accidentally went to and has been inspired by the different genres of electronic music ever since. “I never heard it before, but I instantly became addicted.” She invested in equipment and began going to every local party she could find. She has worked with David Martinez, Dave “Vibes” Tobon, Arana, Bacteria Records, Auricula, Maria Dark, Juan Cordovi, Dimitri, Technolasko & Rissa Garcia for venues in NYC and NJ. International gigs include the Majestic Elegance Resort Punta Cana, Dominican Republic.

“I play based on what I feel coming from around me so you don’t know what sound I’ll give you–and this allows me the privilege to work with many amazing djs.”